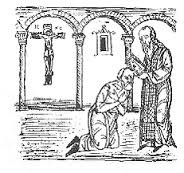 From the Orthodox Study Bible:

Perhaps the most misunderstood sacrament of the Christian Church is confession. How did it originate? What role does a priest play? Is there a special procedure for confession? The Scriptures hold answers to these questions.

Concerning our sins, God’s Word gives a marvelous promise. “If we confess our sins, He is faithful and just to forgive us our sins and to cleanse us from all unrighteousness” (1 John 1:9). The faithful are to bring their sins to God in repentance and receive cleaning and forgiveness.

The early Christian community had a specific practice in this regard. People would stand and confess their sins to God in the presence of the whole congregation! Had not Jesus encouraged His followers to walk in the light together, to confront problems corporately, to “tell it to the church” (Matt. 18:17)? Thus James writes, “Confess your trespasses to one another” (James 5:16). But as time went on and the Church grew in numbers, strangers came to visit and public confession became more difficult. Out of mercy, priests began to witness confessions of sin privately on behalf of the Church.

Jesus gave His disciples the authority to forgive sin. “If you forgive the sins of any, they are forgiven them; if you retain the sins of any, they are retained” (John 20:23; see also Matt. 16:19). From the beginning, Christians understood that the grace of ordination endowed the shepherd of the flock with the discernment and compassion to speak the words of remission, on behalf of Christ, regarding the sins of those who confess and turn from sin. For God has promised the removing of sin from us “as far as the east is from the west” (Ps. 103:12).

“You did not choose Me,” Jesus told the Twelve, “but I chose you and appointed [ordained] you.” (John 15:16). To these same disciples Jesus promised, “It is not you who speak but the Holy Spirit” (Mark 13:11). Whom God calls, He equips. Paul writes to Timothy, “Stir up the gift of God which is in you through the laying on of my hands” (2 Tim. 1:6). It is the grace of the Holy Spirit which enables the priest to serve God and the people.

Thus the Church has encouraged her faithful: If you know you have committed a specific sin, do not hide it but confess it before coming to the Holy Eucharist. St. Paul wrote, “Let a man examine himself, and so let him eat of the bread and drink of the cup” (1 Cor. 11:28), and “If we would judge ourselves, we would not be judged” (1 Cor. 11:31).

Kind David learned a lesson regarding his sin which is recorded for our benefit. For about a year, he had hidden his sins of adultery with Bathsheba and the murder of her husband (2 Sam. 11:1-12:13). Then, confronted by Nathan the prophet, David repented from his heart and confessed his sin in a psalm which is used for general confession to this day (Ps. 51). The joy of salvation was restored to him.

People ask, “Can’t I confess to God privately?” Certainly, though there is no clear biblical basis for it. Even general confession occurs in the Church. In His mercy, God provides the sacrament of confession (more properly called the sacrament of repentance) to give us deliverance from sin and from what psychologists call denial. It is easy to pray in isolation, yet never come clean. It is far more effective to confess aloud to God before a priest, and benefit from his guidance and help.

Thus we come before the holy icon of Christ, to whom we confess, and are guided by the priest, our spiritual father, in a cleansing inventory of our lives. When we tell God all, naming our sins and failures, we hear those glorious words of freedom which announce Christ’s promise of forgiveness of all our sins. We resolve to “go and sin no more” (John 8:11).