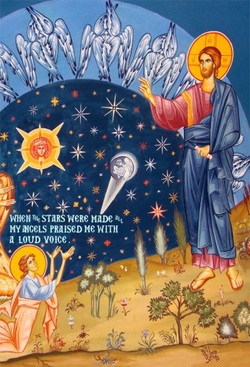 “We believe in one God, the Father Almighty, Maker of Heaven and Earth, and of all things visible and invisible.” These opening words of the Nicene Creed, the central doctrinal statement of Christianity, affirm that the One True God is the source of everything that exists-both physical and spiritual, both animate and inanimate. The Holy Scriptures begin with a similarly striking assertion: “In the beginning God made heaven and earth.” St. Basil the Great declares:

"In the fear that human reasonings may make you wander from the truth, Moses has anticipated inquiry by engraving in our hearts, as a seal and a safeguard, the awesome name of God: ‘In the beginning God created.’ It is He – beneficent Nature, Goodness without measure, a worthy object of love for all beings endowed with reason, the beauty the most to be desired, the origin of all that exists. . . – it is He who ‘in the beginning created heaven and earth.’"

The ever-existent Almighty God was not forced to create the universe. Rather, in His goodness and lovingkindness, He freely chose to do so. And the fact that the Lord created the universe out of nothing stands in clear contrast to the creation myths of the surrounding cultures in the ancient world.

The central role of Jesus Christ, the Word of the Father, in the creation of all things is plainly stated in the first chapter of the apostle John’s gospel, where it is written, “In the beginning was the Word, . . . All things were made through Him, and without Him nothing was made that was made.” And the specific role of the Holy Spirit, the Third Person of the Undivided Trinity, in the creation of the world is seen in Genesis 1:2 (see also Ps 103:30; 32:6).

Regarding questions about the scientific accuracy of the Genesis account of creation, and about various viewpoints concerning evolution, the Orthodox Church has not dogmatized any particular view. What is dogmatically proclaimed is that the One Triune God created everything that exists, and that man was created in a unique way and is alone made in the image and likeness of God (Gn 1:26, 27). The Church Fathers also consistently affirm that each species of the animate creation came into existence instantaneously, at the command of God, with its seed within itself.

The development of life was not by accident. Rather, Supreme Intelligence and Impenetrable Wisdom were at work in the creation and sustenance of all that exists. In discussing various scientific theories of his day, St. Basil the Great declared, “If there is anything in this [or any other] system which seems probable to you, keep your admiration for the source of such perfect order – the wisdom of God.” He also wrote, “We must still remain faithful to the principle of true religion and recognize that all that exists is sustained by the Creator’s power.”

The repeated affirmation “and God saw that it was good” in Genesis 1 underscores the intrinsic, fundamental goodness of matter and the whole created order, even after the Fall. This understanding is the basis for a sacramental world-view – that the created order not only is good, but also can be a means for communion with God, by virtue of being created by the All-Good God. Moreover, the astounding beauty, intricate order, and sublime harmony of all aspects of Creation, as well as the tremendously vast expanse of the universe, are intended to draw mankind to an awareness of and appreciate for the Creator, and to the worship of Him – and Him alone (see Ps 18:1-4; Rom 1:20).