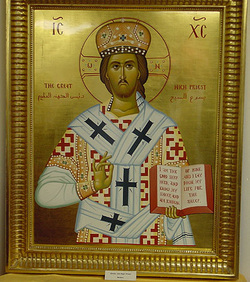 
Throughout the Old Testament, God raised up prophets, priests, and kings from among His chosen people to serve and lead Israel. Not only did these servants minister in their own right, many prefigured the coming of Christ our God, the promised Prophet, Priest, and King.

Deuteronomy 18:15-19 foreshadows Christ as the promised Prophet. The Lord speaks to Moses: “I will raise up for them a Prophet like you from among their brethren, and I will put My word in His mouth, and He shall speak to them all I command Him” (v. 18). The words, “like you” and “from among their brethren” speak of the preincarnate Word taking on human nature to become the promised Prophet.

The New Testament reveals several instances when Jesus is recognized and proclaimed as this Prophet of whom Moses wrote. For example, after witnessing Jesus’ miracle of feeding the five thousand, those present said, “This is truly the Prophet who is to come into the world” (Jn 6:14; see also Jn 7:40). Later St. Peter, while preaching to the Jews, quotes from Deuteronomy 18:18, 19, showing Jesus Christ as the long-awaited Prophet, the fulfillment of God’s promise (Acts 3:22, 23).

Psalm 109:1-4 foreshadows Christ as the great High Priest: “The Lord said to my Lord . . . ‘You are a priest forever according to the order of Melchizedek.’” The Book of Hebrews leaves no doubt as to whom this passage envisions: “Consider the Apostle and High Priest of our confession, Jesus Christ” (Heb 3:1). And, “We have such a High Priest, who is seated at the right hand of the throne of the Majesty in the heavens” (Heb 8:1). This long-awaited High Priest is our Lord Jesus Christ. See also Hebrews 6:20.

A priest is one “appointed to offer both gifts and sacrifices” (Heb 8:3). As our eternal High Priest, Jesus Christ freely offers Himself by willingly dying on the Cross for us. He did so as the perfect sacrifice, fulfilling the requirements of atonement through the remission of sins. By this gift, the promise of resurrection is offered, paradise is reopened, the Comforter is sent, and the hope of eternal life is given. As High Priest, Jesus is both the offerer and the offering.

The Prophet Jeremiah records God’s promise of a coming King. The Lord says, “Behold, days are coming when I will raise up for David the Righteous Orient, and a King shall reign. He will understand, and bring about judgment and righteousness on the earth” (Jer 23:5).

Isaiah promises His government will be not temporal, but eternal, ruling from the throne of David (Is 9:6, 7). In Zechariah 6:13, a priest on His throne is foreshadowed.

On Palm Sunday, Jesus enters Jerusalem as a humble servant-King on the foal of a donkey (see Zec 9:9 and Mt 21:1-7). He willingly and without hesitation, doubt, or fear accepts the extreme humiliation of the Cross. Above His head is written, “King of the Jews” (Jn 19:12-22).

At His Second Coming, foretold in Old Testament prophecy, Christ will come as the all-conquering King of kings to execute judgment, destroy the forces of evil, and establish an everlasting peace. Psalm 2:6 tells us the Father established His Son over the holy hill of Zion. In Psalm 21:28, the kingdom belongs to the Lord, and He will rule over all nations. Isaiah reveals the Gentiles as being included in His kingdom (Is 62:2, 3). Jesus Himself promised the day when people “see the Son of Man coming in His kingdom” (Mt 16:28). In the apocalyptic vision of the Apostle John, Christ’s title is: “KING OF KINGS AND LORD OF LORDS” (Rev 19:16).

We have a Prophet who is the Truth, a Priest whose eternal offering is accepted by the Father and received by us, and a King who will rule and reign forever over His Kingdom.