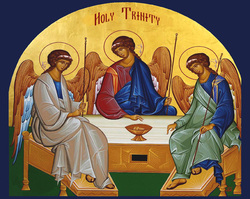 THE HOLY TRINITY CREATED THE WORLD

THE HOLY TRINITY SAVES THE WORLD

Isaiah 63:16 – The Father is our Redeemer. He not only created the world but redeems it as well.
Psalm 2:7, 8 – The Father’s decree reveals the Son as inheriting the world. This inheritance is the people saved by the Son.
Isaiah 6:1-3 – The words “Holy, Holy, Holy” declare the three Persons who save us. The name “Lord” declares the one essence of the Three.
Isaiah 44:3 – The Father pours out His Spirit on people like water on dry ground. The Holy Spirit quenches the thirst of the person who thirsts for salvation.
Isaiah 48:16, 17 – The Son declares that the Father and the Spirit sent Him to redeem the world. Although the Son alone became a Man, all three Persons save mankind.

THE NEW TESTAMENT AFFIRMS THE HOLY TRINITY IN THE OLD TESTAMENT

John 1:1-3 – The Word is the Son of God, who was present with the Father at the beginning of creation. He was Co-worker with the Father in creating the world.
John 8:58 – Jesus identifies Himself as having existed before Abraham. Before His coming in the flesh as Man, Jesus existed as the eternal Son of the Father, for He is begotten from the Father before all time and ages. He appeared to Moses in the burning bush and proclaimed Himself as “I Am” (Ex 3).
Acts 2:17 – The Holy Spirit’s descent at Pentecost affirms His presence in the Old Testament (Joel 2:28-32).
Hebrews 1:8-10 – This Scripture affirms the Father is speaking to the Son in Psalms 44:7 and 101:26-28, in which the Father acknowledges the Son as God and Creator of the world. For the Son was the Father’s Co-worker in creation.

Luke 1:35 – At the Annunciation, the Holy Spirit, the “power” of God the Father (“the Highest”), overshadowed the Virgin Mary; and she gave birth to the Son of God in His flesh.
Matthew 3:16-17 – When the Son of God was baptized in the Jordan by John, the Father’s voice was heard from heaven, and the Holy Spirit descended on Him like a dove. As the main hymn for the Feast of Theophany says, “When You, O Lord, were baptized in the Jordan, the worship of the Trinity was made manifest.”