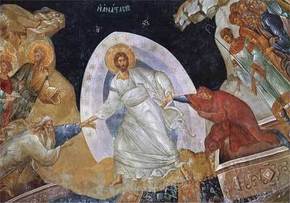 The Sabbath Day, Sunday, and the Eighth Day

When the Lord commanded the Hebrews, in the fourth of the Ten Commandments, to “Remember the Sabbath day, to keep it holy,” He also gave them the reason: “For in six days the Lord made heaven and earth, the sea, and everything in them, and rested on the seventh day. Therefore, the Lord blessed the Sabbath day and hallowed it” (Ex 20:8, 11; cf. Gn 2:1-3). When Moses restated the Ten Commandments in Deuteronomy 5, he added another reason: “Remember, you were a servant in the land of Egypt, and the Lord your God brought you out from there by a mighty hand and by an outstretched arm; therefore, the Lord your God ordered you to guard the Sabbath day and to sanctify it” (5:15).

The Hebrews were called to “remember” (Ex 20:8), to “keep” (Lv 19:3, 30), and to “hallow” or “sanctify” (Jer 17:19-27; Ezk 20:19, 20; Neh 13:15-22) the Sabbath by resting from almost every kind of work. God provided them this sacred time each week to help them contemplate His awesome work in creation and their miraculous deliverance from Egypt. Stipulating the faithful observance of the Sabbath was one of the main ways God ordained to reinforce the people’s covenant with Him (Ex 31:12-17; cf. Lv 24:8). Originally, communal worship was not linked with Sabbath observance; but with the development of the synagogue probably during the Hebrews’ exile in Babylon (sixth century BC), the Sabbath naturally became the day for synagogue worship, as it is for the Jews today.

SUNDAY, THE DAY OF WORSHIP

At first, early Jewish Christians continued to observe Sabbath regulations and to worship on the Sabbath (Acts 13:13-15, 42-44; 18:1-4). But they also met for the celebration of the Holy Eucharist on Sunday (Acts 20:7; 1Co 16:1-2), called “the Lord’s Day” (Rev 1:10), since Jesus rose on a Sunday. St. Ignatius of Antioch, in about AD 107, confirms that Sunday was the main day of worship for the early Church: “They have given up keeping the Sabbath, and now order their lives by the Lord’s Day instead – the Day when life first dawned for us, thanks to Him and His death.”

St. Constantine the Great, the first Christian emperor, honored the Church’s practice of celebrating the Lord’s Resurrection every Sunday by decreeing, in AD 321, that every Sunday would be a holy day. For Orthodox Christians, Saturday is still the Sabbath, the day on which the Church especially remembers the departed, since Christ rested in the tomb on Great and Holy Saturday.

As the day after the seventh day (when God rested from His six days of creation) and as the day of Christ’s Resurrection, Sunday early on came to be understood in a mystical way among Christians as the “Eighth Day.” It was the day “beyond nature and time” (MaxCon), “the beginning of another world” (Barn). “Whether you call it day, or whether you call it eternity, you express the same idea” (BasilG).

Fittingly, during the week after Pascha (Easter), called Bright Week, the Church celebrates Pascha for eight days, almost as though it were one continuous day. By tradition, babies are named on the eighth day after birth. And from ancient times, Christian baptisteries and fonts have been built with eight sides, indicating the newly baptized are entering the realm of the Eighth Day, the day of eternal rest (Heb 4:1-11) in Christ’s Heavenly Kingdom.